A cataract is a clouding of the lens in the eye which leads to a decrease in vision. Cataracts often develop slowly and can affect one or both eyes. Symptoms may include faded colors, blurry vision, halos around light, trouble with bright lights, and trouble seeing at night. This may result in trouble driving, reading, or recognizing faces. Poor vision caused by cataracts may also result in an increased risk of falling and depression. Cataracts cause half of all cases of blindness and 33% of visual impairment worldwide. 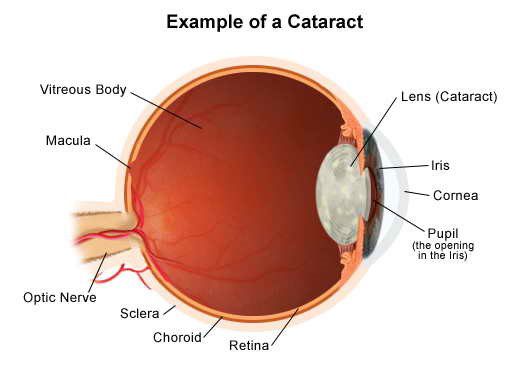 Cataracts are most commonly due to aging but may also occur due to trauma or radiation exposure or some medications as steroids, may be present from birth, or occur following eye surgery for other problems. Risk factors include diabetes, metabolic disorders, other eye conditions especially inflammatory for example Uveitis, prolonged exposure to sunlight and ultra-violet rays, alcohol intake and smoking. The underlying mechanism involves the accumulation of clumps of protein or yellow-brown pigment in the lens that reduces transmission of light to the retina at the back of the eye. Diagnosis is by an eye examination. 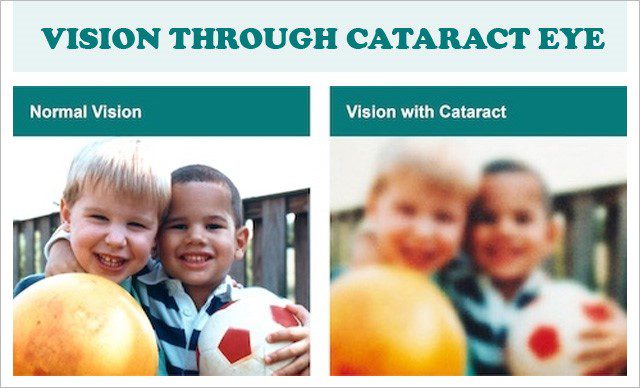 The symptoms of early cataract may be improved with new eyeglasses, brighter lighting, anti-glare sunglasses, or magnifying lenses. If these measures do not help, surgery is the only effective treatment.

Surgery involves removing the cloudy lens and replacing it with an artificial lens. Surgery is needed only if the cataracts are causing problems and generally results in an improved quality of life.

Before surgery, your doctor will do some tests. These tests may include measuring the curve of the cornea and the size and shape of your eye. This information helps your doctor choose the right type and power of intraocular lens (IOL). 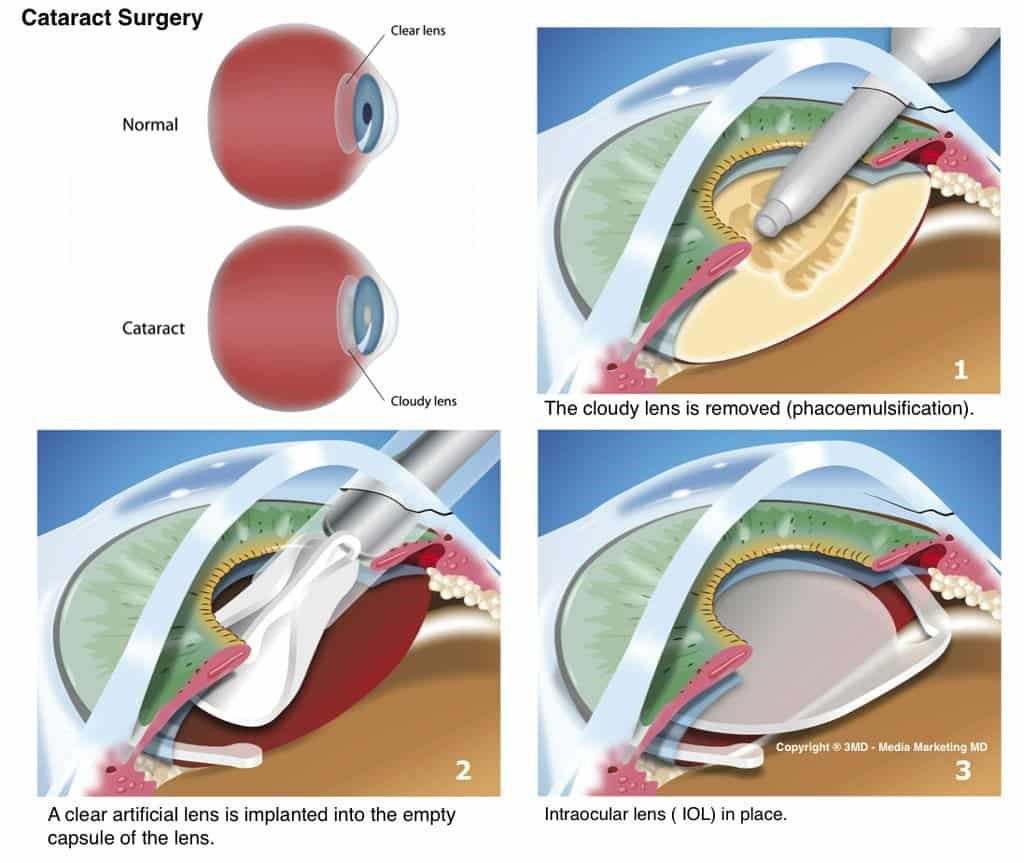 The operation usually lasts less than one hour and is almost painless. Many people choose to stay awake during surgery. Others may need to be put to sleep for a short time. If you are awake, you will have an anesthetic to numb the nerves in and around your eye, even some surgeries are done by using anesthetic eye drops.

For a few weeks after surgery, your doctor may ask you to use eye drops to help healing and decrease the risk of infection. Ask your doctor about how to use your eye drops, how often to use them, and what effects they can have. You will need to wear an eye shield or eyeglasses to help protect your eye. Avoid rubbing or pressing on your eye.

During the cataract surgery the surgeon will implant an intra-ocular artificial lens (IOL) with power suitable for your eye, the choice of type of the IOL may be discussed before the surgery with the surgeon, as there are many types of IOLs, and these are some simple information about the IOLs:

Intraocular lenses (IOLs) are medical devices that are implanted inside the eye to replace the eye’s natural lens when it is removed during cataract surgery. IOLs also are used for a type of vision correction surgery called refractive lens exchange.

Before the use of intraocular lenses in the 1980s, if you had cataracts removed, you had to wear very thick eyeglasses or special contact lenses in order to see after cataract surgery, since no device was implanted in the eye to replace the focusing power of the natural lens.

Today there is a wide variety of premium IOLs to choose from. The best intraocular lens for you depends on many factors, including your lifestyle and your specific visual needs.

The following is an overview of premium IOLs currently used by cataract surgeons. These are considered “premium” intraocular lenses because they have advanced features beyond those found in basic single vision.

During your preoperative exam and consultation, your cataract surgeon can help you choose the best IOL for your needs, as well as additional cataract surgery costs involved if you choose one of the following premium lens implants. 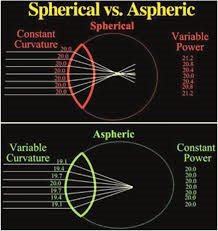 Traditional intraocular lenses have a spherical optical design, meaning the front surface is uniformly curved from the center of the lens to its periphery. Though a spherical IOL is relatively easy to manufacture, this design does not mimic the shape of the natural lens inside the eye, which varies in curvature from center to periphery. In other words, the eye’s natural lens is aspheric (“not spherical”).

This is important because a spherical intraocular lens can induce minor optical imperfections called higher-order aberrations (HOAs), which can affect the quality of vision, particularly in low-light conditions such as driving at night.

Premium aspheric IOLs, on the other hand, match more closely the shape and optical quality of the eye’s natural lens, and thereby can provide sharper vision — especially in low light conditions and for people with large pupils. 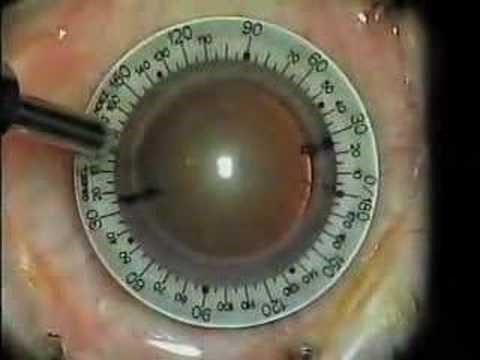 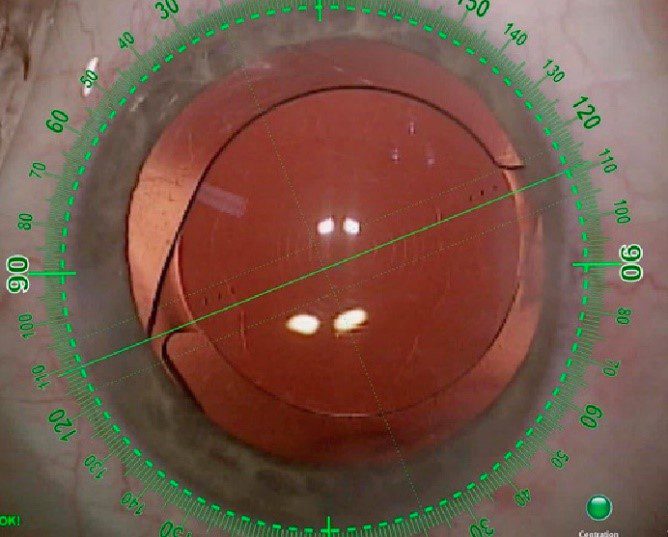 Toric IOLs are premium intraocular lenses that correct astigmatism as well as nearsightedness or farsightedness.

Like toric soft contact lenses, toric IOLs can correct astigmatism because they have different powers in different meridians of the lens. They also have alignment markings on the peripheral part of the lens that enable the surgeon to adjust the orientation of the IOL inside the eye for optimal astigmatism correction.

Prior to the development of toric IOLs, cataract surgeons had to perform a procedure call limbal relaxing incisions (LRI) to correct astigmatism during or after cataract surgery. In LRI, small incisions are made at opposite ends of the cornea, very near the junction between the cornea and the surrounding white sclera. (This junction is called the limbus.) When these incisions heal, the cornea becomes more spherical in shape, reducing or eliminating astigmatism.

In some cases — even when a toric IOL is used — limbal relaxing incisions may be needed after cataract surgery to fully correct astigmatism. But typically in such cases, the amount of astigmatism remaining after implantation of a toric IOL is far less, making a better LRI outcome more likely.

LASIK, PRK and a procedure called astigmatic keratotomy (AK) also can be performed after cataract surgery to correct residual astigmatism, but toric IOLs decrease the likelihood of needing these additional surgical procedures. 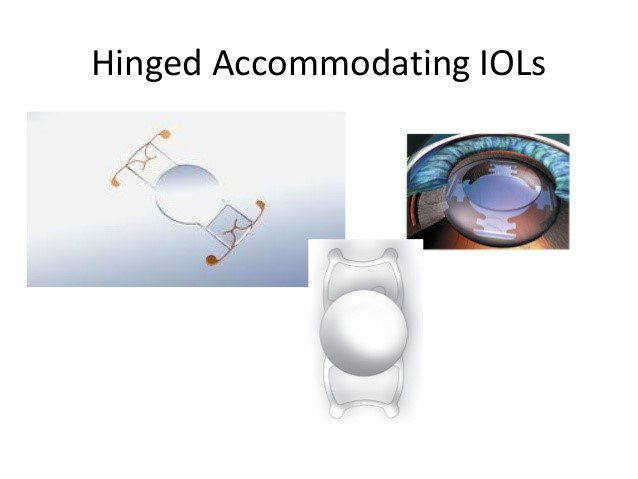 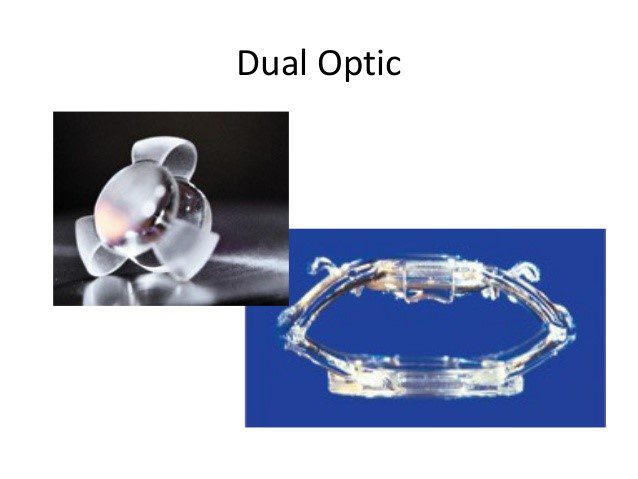 Conventional spherical IOLs are monofocal lenses, meaning they are designed to provide clear vision at a single focal point (usually far away for good driving vision, for example). With conventional IOLs, typically you must wear eyeglasses or contact lenses in order to use a computer, read or perform other close-up tasks within arm’s length.

Accommodating IOLs are premium intraocular lenses that expand the range of clear vision with both an aspheric design and flexible “haptics” — the supporting legs that hold the IOL in place inside the eye. These flexible legs allow the accommodating IOL to move forward slightly when you look at near objects, which increases the focusing power of the eye enough to provide better near vision than a conventional monofocal lens.

Accommodating IOLs may not provide the same level of magnification for a near vision that a multifocal IOL does. But many people find these premium IOLs greatly reduce their need for reading glasses or computer glasses after cataract surgery. while providing exceptionally clear distance vision similar to that offered by a monofocal IOL. 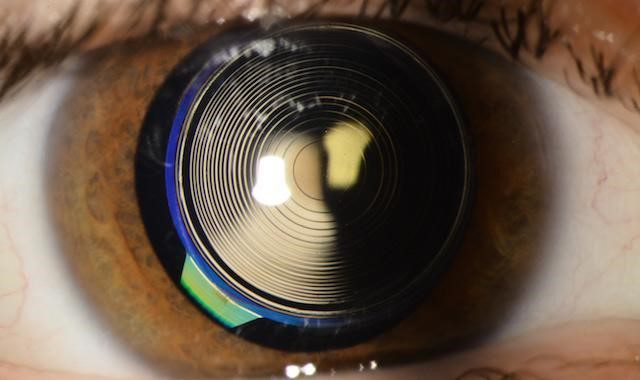 Multifocal IOLs are another category of presbyopia-correcting IOLs that can decrease your need for reading glasses or computer glasses after cataract surgery.

Like multifocal contact lenses, these premium IOLs contain added magnification in different parts of the lens to expand your range of vision so you can see objects clearly at all distances without glasses or contact lenses.

Your cataract surgeon can help you decide if you are a good candidate for multifocal IOLs at your preoperative exam and consultation.

At the Eye Care Center we provide top quality service using cutting edge technology in the field of cataract surgeries. Specialized consultants and up to date equipment provide an exceptional cataract treatment using the most advanced IOLs.